A couple days ago, my mantis Clover sort of started to lay an egg, then abruptly stopped after laying the rough groundwork. For some reason, she then stood still with a line of egg material going from her to the wall until the stuff dried. Not sure how important this is, but the first bit is probably relevant.

There was a slight black discoloration to the top of the final segment of her abdomen once I cut her away from the wall. I was kinda concerned, but figured it was probably no big deal. (I've never had a mantis do this with an egg before. . . ) Today, I found her apparently on death's door. That discoloration is still there and it's gotten worse. My best guess is some sort of intestinal blockage (sorta like really bad constipation), because it does look from the outside like a buildup of fecal matter, and there's sorta a partially passed stool visible. . . it's kinda gross. Could someone please confirm/correct this diagnosis and tell me what, if anything, I can do about it?

Here's a picture of the partially formed egg: 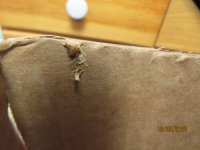 Here's a picture of the discoloration. 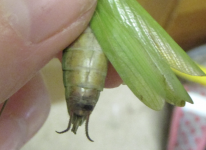 Okay, what do I do about it?

Euthanize her, nothing you can do. If she is super weak and can hardly move, end her suffering.

I did. She's gone now

Sorry for your loss!

sorry for your loss