This is a work in progress, but here's the first draft of my experiment. Note how a scientific article is structured

Alex Baranowski​
Introduction: Insect nutrition is a complex topic. Laboratories rearing colonies of insects often utilize a defined artificial diet that contains all of the macronutrients, micronutrients, and various preservatives and phagostimulants. This often overcomes challenges associated with seasonality of hosts, although the use of artificial diets is often only helpful for herbivorous insects. Furthermore, many herbivores will not accept an artificial diet, and so live host matter is necessary.
Improper nourishment during development of an insect is associated with health and fertility problems (Wheeler 1996, Dmitriew and Rowe 2005, Barrett et al. 2009). This has been demonstrated across feeding guilds, from herbivores on stressed or well-defended plants, to generalist predators and detritivores.
Mantises are generalist predators that, in the wild, utilize prey items from dozens of taxa (Hurd et al. 2015). Some of these prey items carry transient gut microbes with them (Tinker and Ottesen 2018), which play important roles in the absorption of nutrients (LeBlanc et al. 2013). Captive mantises, however, are often fed limited diets (Vanitha et al. 2016), particularly when young. In addition, the practice of gut-loading prey items, which is the process of feeding a prey animal an enhanced nutrient food before feeding it to the predator, may be neglected, although it has demonstrated positive effects on insectivores (Livingston et al. 2014).
Fruit flies (Drosophila species) are usually used as the first feeders for mantis nymphs. Unfortunately, there is little knowledge on how such a low diversity diet early on in mantises affects the future development of the nymphs. Additionally, there are few other easily available or practical food options for such small insects. In lieu of a variety of prey early on, I ran an experiment wherein fruit flies (D. hydei) were gut-loaded with crested gecko diet (CGD) before feeding to an experimental group of hatchling Creobroter apicalis.
Materials and Methods: The entire life cycle of C. apicalis was treated the same way. Within a 120x60x150cm mylar grow tent, conditions were kept at 24+5C, 55% RH, with a 16:8 L cycle. Lighting was provided with daylight color LED bars. Mated females of C. apicalis were maintained in 900mL polypropylene containers with a cloth ventilated lid (fitted with moist cotton misted with DI water every other day) and a length of silk plant for oviposition. Oothecae were transferred to 940mL polypropylene containers with the same lid configuration and misting regime. Within the cup, a paper towel was on the floor and there was aspen excelsior filling the inside of the container. Containers were rinsed with hot water every 3 weeks and cotton pads were replaced with the same frequency.
Drosophila hydei were maintained in a separate grow tent with the same internal conditions as the mantises. Cultures were made within 710mL polypropylene containers with cloth ventilated lids. Culture medium was made with Repashy Superfly (Repashy ventures, Oceanside, CA), which is a medium derived from yeasts, seaweeds, and fruits. Repashy superfly was prepared as instructed with one exception: 20% of the liquid volume added to the powder was white vinegar, as this was necessary to stifle Acarus siro densities in the cultures. A single coffee filter and some excelsior were stuffed within the fresh medium. Three days later, about 20 mature D. hydei were added. New cultures were made each month.
For the gut-loading group, numerous D. hydei were placed within a 940mL polypropylene cup with a ventilated lid. At the bottom of the cup, about 10mL of prepared (as directed) Pangea apricot CGD (Pangea Reptile, Zeeland, MI) and a sliver of coffee filter were added. Flies were allowed to feed for 12h before use. Pangea apricot CGD is a fruit, bacterial culture, and protein-based powder that has 21% protein (as compared to the 12% in Repashy Superfly). 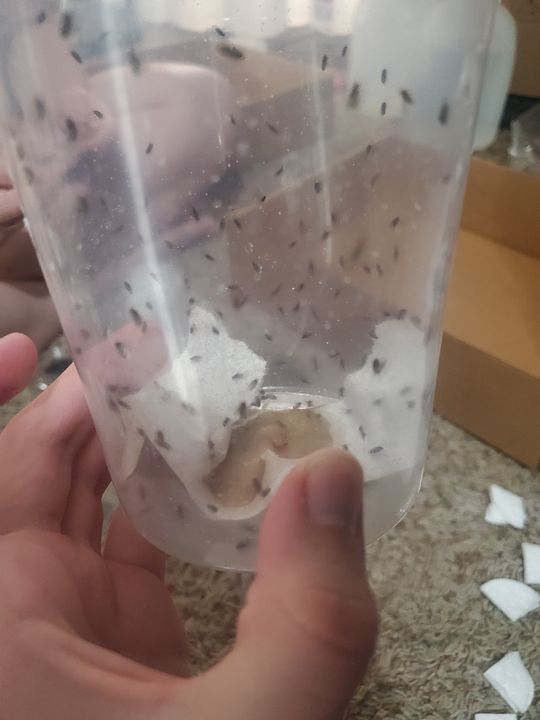 Upon hatching, nymphs were given water and split into separate 118mL polypropylene portion cups. Such cups were modified in the following ways: a paper towel sliver approximately 2cm wide was hot-glued up one side of the cup, there was a 0.5cm wide hole soldered into the lid by the edge and plugged with cotton to facilitate feeding, and a 3cm wide hole soldered into the center of the lid with a sheet of mesh hot-glued over the hole. Moist cotton pads were placed over the bigger holes. One nymph was kept per cup. There were 20 nymphs per group. The cups were placed at random in cardboard trays for organization, with a daily, random reshuffling of the cups to avoid pseudoreplication. 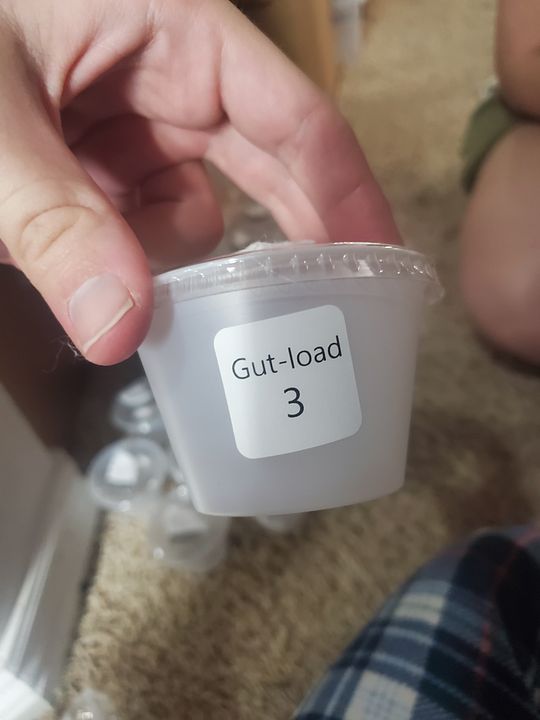 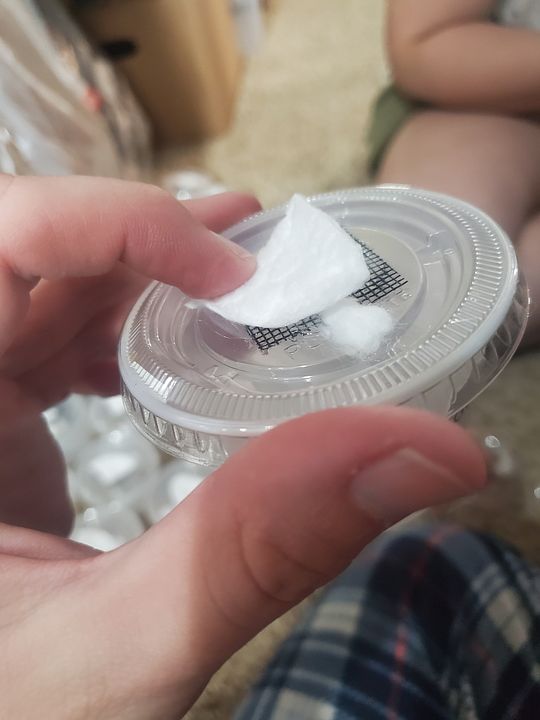 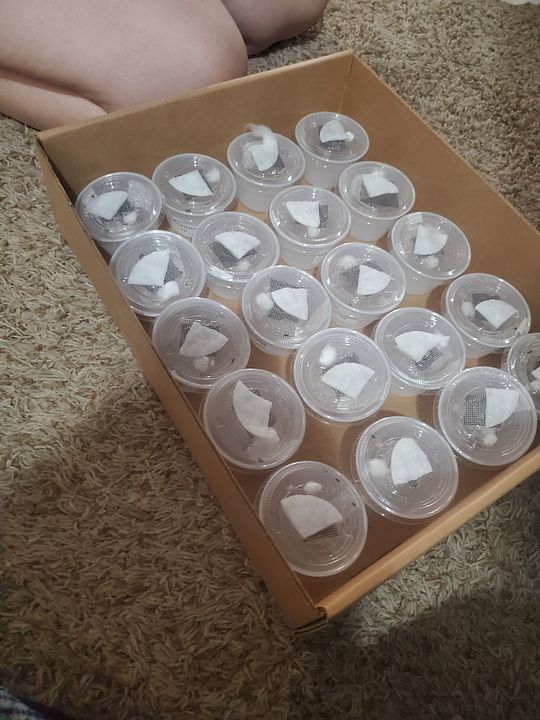 Nymphs in each group were offered 2 D. hydei per day. The performance measures of survival rate and number of days to the first and molts were recorded for each nymph. Nymphs were sexed at the third instar to use sex ratio as a covariate (as females of this species have an extra instar and are larger). All data were analyzed in R (version 4.0.3), with 2-sided t-tests run with the fly gut load treatment as the independent variable and performance measures as dependent variables.

You blow my mind. You must excell in your studies!

we finally had a death in the gut-load group
RIP gut-load 12! We will miss you dearly!
I

This is a great experiment. I am curious whether Orchid mantises or other species that are considered hard to breed will do better with fruit flies gut loaded with bee pollen.

happy1892 said:
This is a great experiment. I am curious whether Orchid mantises or other species that are considered hard to breed will do better with fruit flies gut loaded with bee pollen.
Click to expand...

agent A said:
we finally had a death in the gut-load group
RIP gut-load 12! We will miss you dearly!
Click to expand...

Cause of death?
I

I have no idea

Thank you for taking the time post this. I look forward to the end results.

we are getting third instar nymphs now! so far it's mostly males but I think that's because males don't need as much time to reach the next instar
however, half of the remaining gut-load group has molted to the third instar, while only 2 of the remaining 15? control group nymphs have molted!

ok so here are the final results from this run of my experiment:

ok y'alls! so here's a general update
my former major professor from URI said I need to up my reps, so I'm in the process of getting the n of each trt group to 60. I am at 45 now, and I have subadult pairs of C. apicalis so here's to hoping we will get more of these soon
he was like "yea, the differences between the groups may drop out if you up your reps" but they're only becoming more evident!
I am also going to be incorporating Tenodera sinensis in this, good to do this across families. Plus if someone Karens out on me about an exotic hymenopodid, at least I have a naturalized species in my experiment to report on!

ok, I ran the data I have so far again just cuz I couldn't help myself. Please note that for the 2nd instar duration, cumulative survival to 3rd instar, and M:F ratio aren't done yet as not all nymphs have reached the 3rd instar

Well, the gutload seems to be doing something lol.

ok here's the final data report for the first 45 reps