Hopefully this will help with many fruit fly questions. This article is taken from Invertebrates-Magazine March 2006.

Feeding baby mantids, dart frogs, small lizards and many animals would be extremely difficult and captive breeding would never have gotten off the ground without these feeders. Fruit flies are an old live food that has been cultured since before anyone reading this was born. They eat rotting rather than fresh fruit, some taxonomist tried to change the common name but nobody remembers that name and it won't be repeated here. Though common to rotting fruit everywhere they are also common annoyances in the gooey drains of soda fountains and floor drains in many restaurants, especially bars.

Fruit flies are very significant in that our knowledge of genetics has been much enhanced through the study of this fast breeding insect and no genetics student can escape them. Thousands of mutations have been isolated. It's possible to purchase cultures with specific mutations and various combinations from biological supply houses. Countless more mutations are maintained at various universities. The mutations of interest to hobbyists are 'flightless', crinkled wing and wingless. Flightless, however, can fly somewhat if temperatures are greater than 85F. Flies may be ordered online, through pet shops, or picked up at local herp shows. Wild flies are easy to lure with rotten fruit.

The main species is Drosophila melanogaster, which is normally light brown with red eyes (of course they can be ordered with different eye colors). The adult is just small enough to walk through window screen. D. hydei averages twice the mass but more importantly it's wings are too large to let it walk through screen, even stunted individuals. D. hydei is normally black but the new form called "golden hydei" is light brown. "Golden hydei" have begun replacing the old form in the last few years because they are easier to keep. Both D. hydei varieties are available in flightless only (crinkled wing and wingless might not be isolated for this species). The larger size is great for certain uses (primarily if cages have window screen vents) but D. melanogaster cultures are much easier and much more productive for much longer. I keep both, but using smaller size screen (and accordingly increased vent size) to make the cages could have been a lot easier.

Some may remember banana mash, oatmeal, cream of wheat and various things from the past. However, instant potato flakes are extremely cheap, perfect for Drosophila and are used almost exclusively at present. Special mixes are available which are made from potato flakes with a little yeast and vitamins added. A dash of lizard calcium-vitamin supplements can be added to the potato flakes in hopes it will make the flies more nutritious. However, the real value is questionable since it doesn't improve culture productivity (if it doesn't improve fly growth what are the chances they take up enough to improve their predator's growth?). On the other hand, powdered protein can visibly improve culture productivity.

If ambient humidity is less than 40% add 2 teaspoons water. If 15% or less add 1-2 tablespoon water. There will appear to be way too much water, but in only a short time the flakes expand. If too much water is used the bottom layer will turn back into water by the next day. If there is too much water the flies and maggots can drown, too little and they won't lay eggs or grow well. The upper surface should be fluid when the maggots are approaching full size but only the upper layer and not before that time.

Fruit fly females lay eggs in the presence of fermentation products, which is why yeast has been commonly added to the cultures. There is an undeniable improvement in how fast and if a culture starts with an egg laying stimulus. However, yeast takes some time to ferment so fly keepers have started using a teaspoon of vinegar instead. Why wait when you don't have to. I found a dash of Sambuca worked even better (any liquor will work). In the last few years I switched to using a slice of apple, around 1", placed on the substrate because of better results. Apple slices were used to keep flies alive in feeding cages where necessary (most other fruits produce messy slurries that trap and drown baby spiders, mantids, etc.). The flies readily laid eggs on the apple, but there wasn't enough food. Apples are very inexpensive and a half or quarter lasts months in the fridge kept dry (if covered it molds). Only one egg inducing method is necessary but use of all four together probably wouldn't cause a problem. Lastly, start cultures with 30-50 flies to get a decent size initial batch.

Small vials (thin and tall with barely an ounce of media in the bottom) with sponge stoppers used to be the norm. Small vials are tedious, get old rapidly, produce minimally and are more attractive to mites. 32oz. deli-cups with coffee filters and rubber bands or manufactured coffee filter lids have become the container of choice because they work so well.

D. melanogaster can be reared in temperatures from 65-90F but can be more difficult in the lower end of the range. D. hydei may not be worth attempting if you don't have an area at 75F or better. Cultures can be jumpstarted by setting them next to a warm light for the first day or two (not too close, it is a plastic container).

When using yeast alone this can be pretty important because the yeast needs to have a head start on fermenting before the mold gets too bad or the females won't lay eggs. Mold always grows eventually but once the larvae get going they eat it all. With alcohol or apple slices used to induce egg laying, mold inhibitor is not needed. I have a big jar I haven't opened in years and always have at least a dozen cultures going.

Clean containers with soap or use new containers. With clean containers, mold and bacteria may never be a problem if the flies find the substrate acceptable for egg laying and the temperature and moisture are adequate. If flies die or grow slowly because of bad conditions mold and bacteria will eat the substrate no matter what. Grain mites are often found in cultures but are minimal if the substrate is wet and the cage isn't too small. If there's a small hole in the filter paper, phorid or house fly maggots can appear in huge numbers in the culture.

Once the Culture is going

Once the maggots get going they'll drown mold and mites as well as adult flies and puparium. A wadded piece of paper towel should be placed in the container as soon as the first puparium is noticed (puparium are brown). Do not add earlier. The number of flies produced is doubled or tripled because flies and puparium are saved from drowning.

Hold the container upside-down and tap lightly as the flies fall out. If too much water was added to the media it will drip, fall out or smash half the flies.

Temperature, humidity, number of flies started with, media and caging greatly affect culture life. The first wave of flies produced is the biggest and healthiest to start new cultures most quickly. At 75F, D. melanogaster cultures produce the first puparium on day six, first adults by day ten and continue off and on for 6-12 weeks. D. hydei take fifty percent longer and mature closely together. D. hydei cultures usually produce a second wave if media remains and the adults aren't removed too soon. Both species produce undersized flies as the food begins to run out because the larvae pupate prematurely. Once 80% of the media is gone or growth slows down significantly, it's time to start over. Old cultures can be kept longer if smaller food is desired but production is minimal. 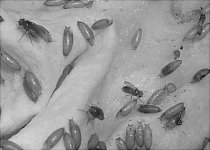 Please refer to the following threads for an extensive discussion on other methods for raising fruit flies: