whewww FINALLY! I GET TO POST! i was waiting YEARS (joking) for this to happen. as i was waiting, ive been really just looking at random threads while my account gets validated. i came across Mantidbro's thread on his past mantis-collecting experience(s) and really was inspired even more to raise the little creatures .w.

i was relieved reading that he started with Tenodera sinesis ooths, cause i too, was planning on buying an ooth that was not "exotic" of any kind. i planned to begin with species that are more easy to handle and progress with more and more that are a bit difficult. i did raise mantids in the past, but unfortunately quit due to financial reasons. so i do have some experience, but i might have forgotten some things haha.

what ill be telling y'all now is how i was first introduced to the little aliens. so me and my dad, would run/jog at the park everyday and my little brother would play in the basketball court. i stood near these bushes and saw a strange figure on top of the leaf. i thought it was a grasshopper at first, so i screamed. but as i looked closer, i realized it was a praying mantis!! i havent seen these since i was rlly little. i was so surprised to finally see one! it was a tan brown Stagmomantis Californica? with almost a leaf-like wing and it was fairly huge.

i wanted to catch it and show it to my family. then i kept coming back and i always looked forward in catching more. eventually, i caught a pregnant female and she laid an ootheca on the stick and i was fascinated!! it was super awesome that they are able to make such a beautiful piece of art. we waited and waited for it to hatch, but i guess it was winter so i was super impatient and i rlly dont know what happened after that. LMAO Then one night, as we were playing in the court, a mantis flew onto my brother's shorts XD and i noticed it was different. it was more narrow and it had wings that can really fly. it had to be male! i caught that one too and really wanted them to mate. i was so stoked... at that time, i bought one of those mesh rectangular cases from Backyard Safari that i got from Toys R Us. (it was the only container I had at the time) also, we got rid of the old pregnant female. (i didnt know that they can produce multiple ooths in a lifetime) and it was a different female this timr and i was getting ready to put the male in so that i could actually see them mate for once. it was really the coolest thing ever. as soon as he saw her, he flew straight into her back. she didnt notice but let him do his thing. and i wanted her to eat him after he was done. so i didnt separate them, and the next morning, he was gone. (the reason for this, was that, i heard that the female eats the male for protein and nutrition for the offspring and so i did that) i didnt know we could reuse them and produce more fertile ooths. LOL

so as i was getting more and more interested in mantids, I began searching for more to catch. and so, i went to another park thats kinda far, and we went for only that reason. i remember my dad and i roaming around seeking them. (i think i was 11/12 at the time) i couldnt find one for hours, until we passed the pine trees. i would never have thought there to be some in the pine trees! they were camouflaged so well and we only caught maybe about 2. they were either small nymphs or (pre?)sub-adult. i remember bringing a net with me, and with that, we caught butterflies for their lunch. i enjoyed watching them eat and even sometimes, i could hear them munching on their snack. (^:

after about awhile, i found out that there were soooo many kinds of mantids on the internet, but the most that really stood out to me was the all-time famous, orchid mantis. i was super obsessed. theyre super beautiful!!! i even screenshotted all my fav pics of them on Google, watched many Youtube videos of them, and i researched on how to take care of them and what they needed. they were the only thing that was on my mind at that time. i knew that i HAD to get my hands on them. it was literally my LIFE GOAL to actually have them... until..... I GOT THEM!!!! i was just so so so so excited. my mom paid for them ($20 each L2/3) and i thanked my mom for an exchange of getting good grades at school. I just couldnt stop jumping. it was really a moment to remember. i fed them fruit flies and i didnt know how to use the feeder hole, at the time, so everytime i would open the fruit fly culture, there would be many flies coming out. xD i think we got 2 "orchies" and they both grew really big!! i remember one of them growing up to sub-adult, and another adult. i wanted a male so that they could mate, but i never had one. they were my first "exotic" mantids i ever got to handle, and, i gotta say.. they weren't that hard to keep and raise. i was fine until some incident occured. i remember having multiple small, newly-born orchies and they were all in this medium sized cup with excelsior. I cant remeber why or how it happened, but i think my mom put them in the window sill where direct sunlight shown.... after i found out, i was down in tears. i couldnt forgive my mom and was really truly heartbroken. after that, i might've stopped and took a break from everything that was happening. but either before or after this, i remember dealing with Indian flower mantids (Creobroter Pictipennis), Ghost Mantids (Phyllocrania Paradoxa), African Twigs (Popa Spurca) and one sub-adult Dead Leaf Mantis (Deroplatys Lobata). it was really quite an adventure and now i'd love to deal with mantids again! its been on my mind everyday and i do pray that i can have many of them. i feel so comfortable and more secure with them. its like a deep connection between them. my love for mantids is deep, but my mom thinks its crazy. especially since i dont have any pets at all... i believe having pets will not make me depressed and miserable and lonely all the time. anyways, i feel like its gonna be another journey starting all over again! ill update you guys on anything new that'll happen! and i hope to get advice on anything i need help on.

my current status: I have nothing right now, but am planning to get enclosures, deli cups w/ mesh, fruit fly culture, excelsior, substrate, fake flowers/sticks, and a spray bottle. For my mantids, I'm planning on getting a Chinese? ootheca from one of those ebay sellers. I also plan on getting ghosts, orchids, spiny flower, african pinstripe and twigs, but the opportunity will come hopefully. thanks so much for reading, hope i didnt waste too much of your time haha. byeee. sorry its so longgg :x

I also just remembered: while I still collected, I had a camera and took many shots of each one of them. UPDATE: my camera slipped and had a quick swim in the ocean. but luckily, i posted most of them on Instagram. about a year ago, i screenshotted all of them and changed the account into something else. on the device that contained all the screenshots, i happened to lose. it was a rough and unfortunate year for me. :'(

also, i had a small container that had ALL the successful molts throughout my mantis collecting memories. it was a whole bunch! if I can find it, I'll send a pic ASAP!

as I found it, I was so glad and just joyous that I still have a "fragment" of at least many of them. I really missed them so much and touching them and remembering back made me smile so much. I'm truly happy 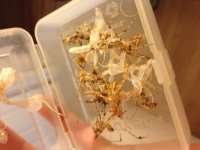 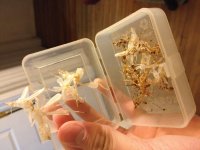 *these are all my videos and have stopped using the channel*

T. sinensis are not the easiest to raise so keep in mind many will perish. But at least you will be out little or no money.

Tenodera sinensis (the one and only)

Welcome, I have a hard time raising them, dont know why. (chinese)

was gonna say the same thing I had more problems with Chinese than any others ; (

Bloodtkr said:
was gonna say the same thing I had more problems with Chinese than any others ; (
Click to expand...

wow really? and I thought Chinese is moderately easy

thanks for the welcoming greetings! I feel like I belong here in this huge family (^:

Chinese mantids can be very difficult even for experienced keepers. They are only "easy" in the right conditions.

MantisGalore said:
Chinese mantids can be very difficult even for experienced keepers. They are only "easy" in the right conditions.
Click to expand...

got it. thanks for the info!!

I love your story. I think it is totally awesome that your dad helped cultivate your interest like that! Welcome to the group.

tlchams said:
I love your story. I think it is totally awesome that your dad helped cultivate your interest like that! Welcome to the group.
Click to expand...

thanks!! yeah, I'm pretty luck to have him by my side.

Welcome to the group!