My technique for mating mantids

Many people new to this hobby want to know how to mate their mantids. Below I will outline a technique I have been using for years with great success. It's very simple but works well. It is not the only way to mate mantids. I have also had success with just placing a male onto a females back. This often works with older males.

Keep in mind this is a generic guide. Some species need more specialized conditions to mate. This simple method should work with most species in culture. Mantid mating involves male recognition of the female via pheromones and sight. Studies indicate a feeding female may cause a male to approach more quickly (Gemeno and Claramunt 2006). And according to Perez, virgin females are more attractive to males (2005). And lastly, another study indicates males may be more attracted to heavier females who deposit their eggs soon after mating (Lawrence 1990).

Step 1: Your mantids must be adults! The mantids should also have been adults for at least a couple weeks. Generally the older they're the more inclined they will be to mate. Young males may not initiate mating and young females may not be receptive to the male.

Step 2: Take your adult male and place him on a surface. This can be a flat surface or a hanging surface but make sure there is space. He may want to wander off but should settle down soon. 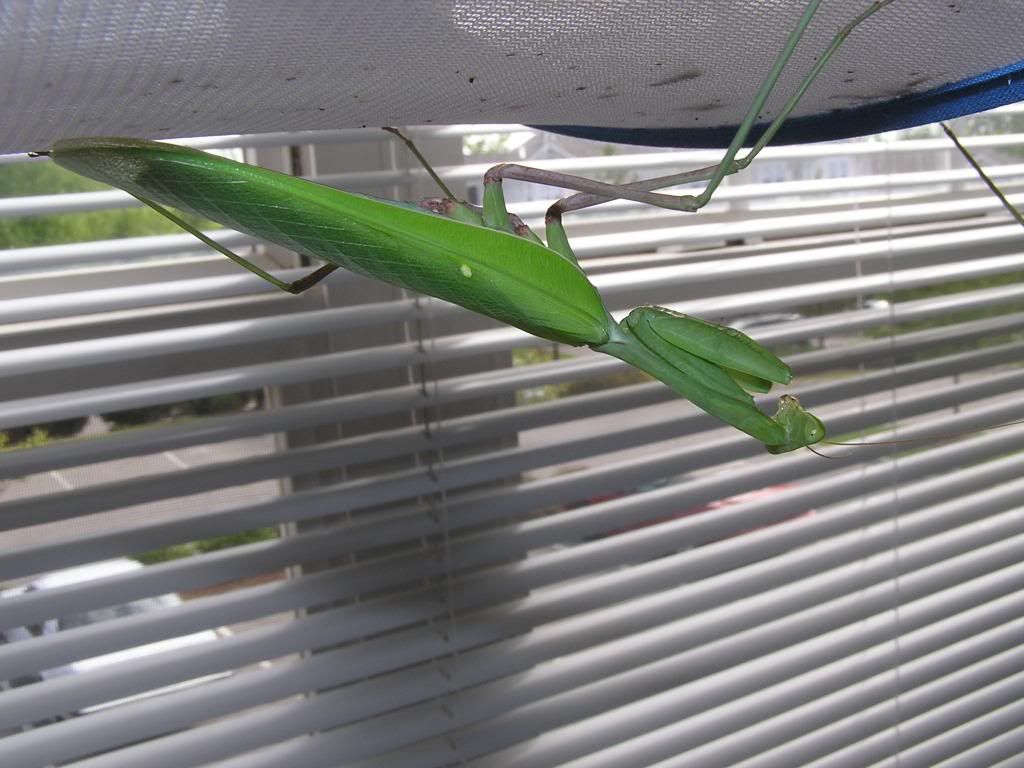 Step 3: Now that your male is settled down get your female ready. Take her out of her cage and place her about 8 inches or so from the male. Make sure she is a little bit in front of him where she can't see him. If she sees him like in the pic below divert her attention from him. 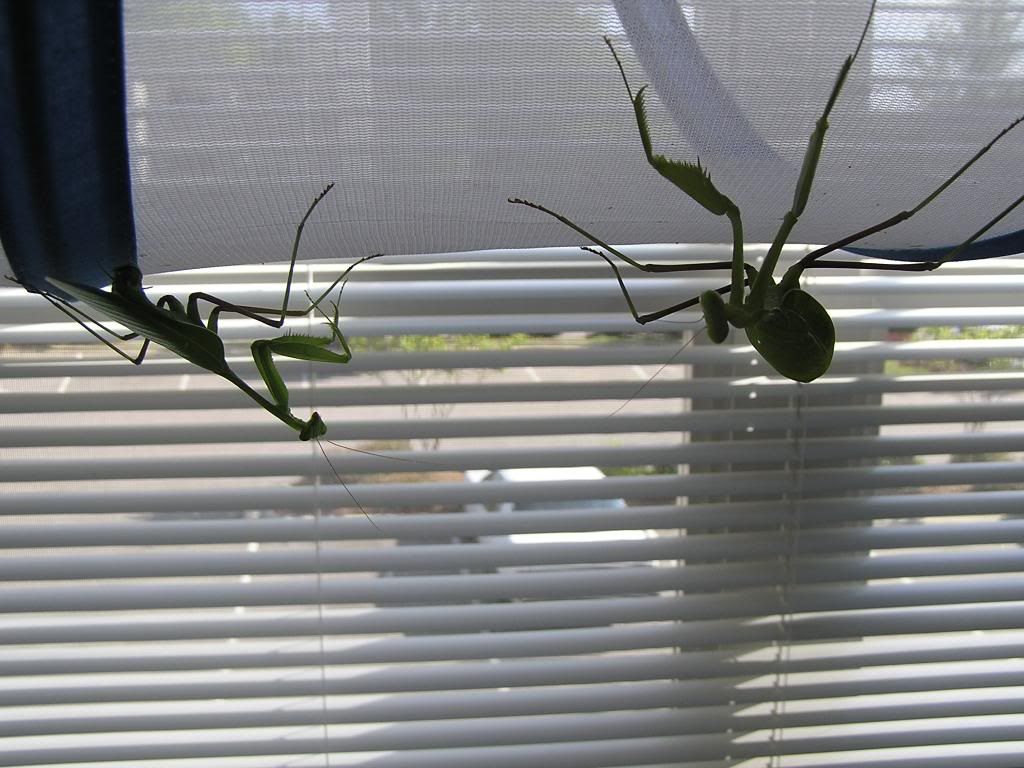 Step 4: Now using a long pair of tweezer, stick, etc prod the female to make her walk AWAY from the male. You may also offer her a food item with some tongs. But ensure some movement occurs and the male sees it. He should see her soon and give her attention. If he is ready his antennae will point at her and he may creep closer ever so careful. If he sees her it's ok to stop proding her along. If he stops move her a long a little bit more to keep his attention. 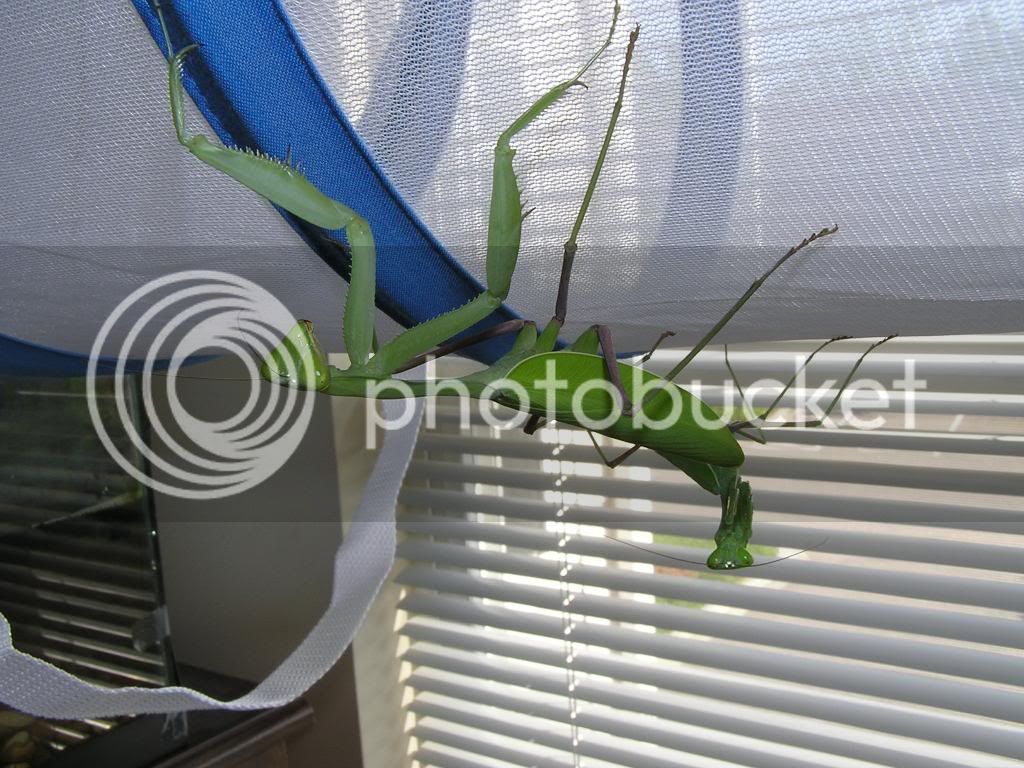 Step 5: Once the male is locked onto the female he should keep approaching on his own. Now may be a good time to use your tweezers to give her a cricket or roach to keep her front legs occupied. I usually don't bother with giving her food unless she seems to get annoyed by the male on her back. He should eventually jump on her back quickly. He may jump on backwards. This is ok and I assume it's to protect his head. He should turn around soon.

If he just sat there and never jumped on her back give him a sharp blow to make him move towards her more.

Step 6: Now that your male jumped on the female he should have got positioned and starting bending his abdomen towards the females. He may also tap her quickly with his front legs or used his antennae to "slap" her with them. She should open hers up once he makes contact and they should begin mating. I tend to leave the pair loose in a room to give him ample room to escape. Or you can use a large cage or net cage. Don't try to watch them the entire time. Most mantids mate for HOURS OR DAYS. 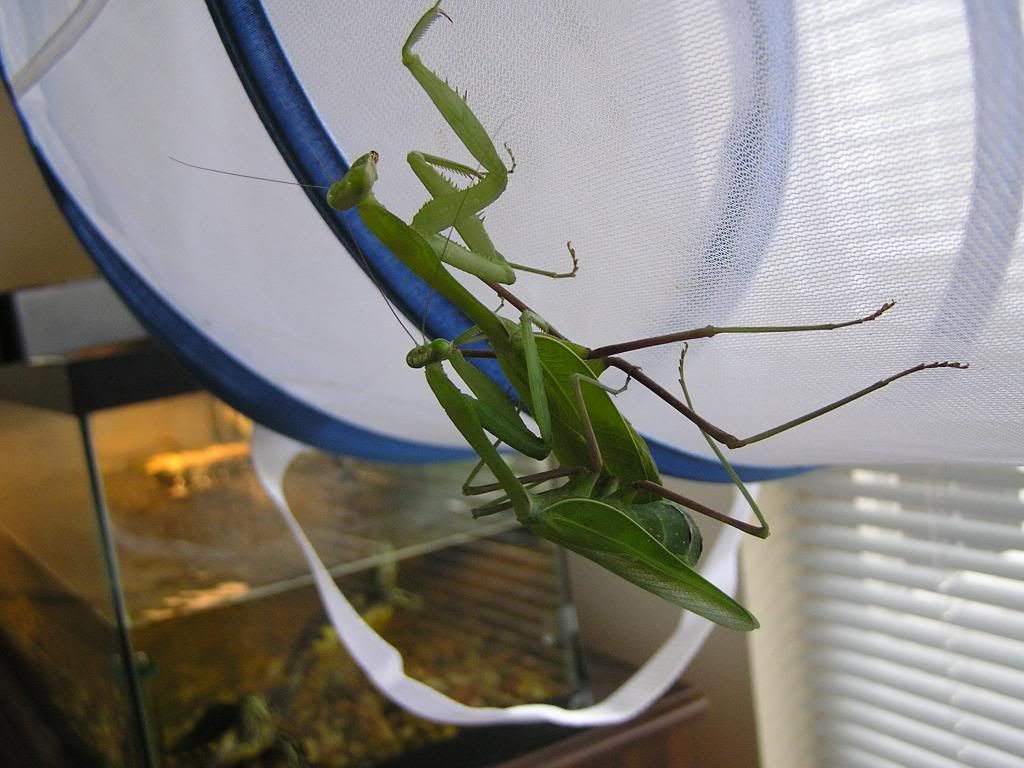 Step 7: Once you find them apart put them back into seperate cages. The female can lay several ootheca on one mating but it may be helpful to mate her again after she makes a few though the jury is still out on that. You can use the same male or a different one.

1. Male shows no interest in the female: Put them away and try again in a few days.

2. Male jumps on but the female freaks out and they turn into a crazy mass of wings and legs: Quickly and carefully try to seperate them before she bites. You may want to use a glove or a stick or something to avoid getting pinched. I just use my hands. If she gets a hold of him grab her and squeeze her thorax gently. This should make her let go. Try to mate them again. If she keeps freaking out, wait a week and try again. She is not really ready.

3. The male just sits on her back doing nothing: Blow on him with a quick, sharp breath. He may start then. Or you can gently squeeze his thorax with your fingers. If he still doesn't do anything after some time carefully pull him off and try again in a few days.

4. You come in and check on the pair only to find your male being eaten or already half consumed. Just let them be. He can continute to mate and there is nothing you can do for him anyways.