hoping for a ton of ooths

False garden mantids look exactly like Miomantis caffra however one difference to tell the species is the size of the wings on the females. In miomantis, Females have wings that cover the whole abdomen but for pseudomantis, the wings on females only cover half the abdomen

Dude, you actually have the best mantis luck

I caught ALL my mantids at my school

I’ve been trying to start a business for a while

Still had 1 female left to fertilize

After almost half a year, i have returned to this post XD

all my green garden and false garden mantises have passed away after a happy, healthy life but i still have 2 more species,

The stick mantis, archimantis sp and the snake mantis , kongobatha daidemeta (which this post is about).

what i first thought were both female snake mantises, turned out to be a 1m 1f pair! They are both the same size and i think they are the same instar, around l4-l5(i know size is not an accurate way of telling tho). I have started feeding the female more often than the male so that she reaches maturity faster. I have absolutely no information on how to care for them as they are not a well known and studied species, so i am keeping them purely on my experiences with other mantises!

They do not have names, but i was thinking Felix for the male and Anna for the female but if you had any other suggestions i would love to hear them! Anyway, here they are: 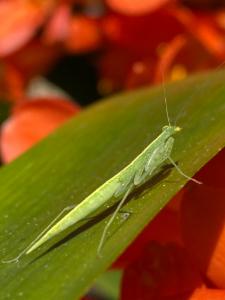 Male. His red stripe across they eyes are much less visible(invisible in the camera) but you can see them very closely when you actually hold him! 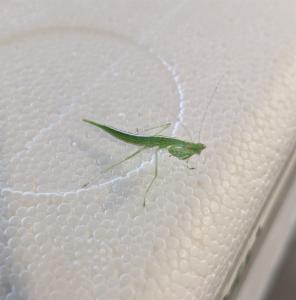 Female. Here she on some Styrofoam packaging, Her eye stripes are much more visible!

Here is my angyyy n sassy bae Ursla, she is an adult female archimantis latistyla. Still waiting for my male Aliquis to molt to adult

Yeah, she's got some attitude

Funny is that every mantis has his/her own character

i love her so much

S
is strawberry a normal food for mantids? :/